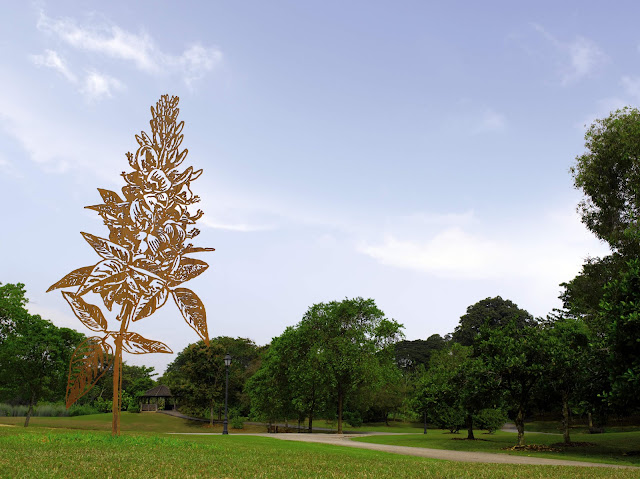 Hong Kong, 22 January 2013 Sotheby’s is pleased to announce that Sotheby’s Presents Zadok Ben-David at Singapore Botanic Gardens – the company’s first selling exhibition of outdoor sculpture in Asia – has now been extended for two weeks until 15 February 2013 in response to the overwhelming interests from clients and visitors since its launch in October 2012.
Sixteen sculptures of figures, plants and butterflies by the internationally renowned artist Zadok Ben-David are now on view in the magnificent setting of the Gardens. The works take nature as their inspiration and play with our perceptions of scale and reality, echoing themes from many of Ben-David’s most powerful sculpture series. The exhibition, which is open to the public free of charge, is taking place with the support of the Singapore Tourism Board and the National Parks Board; and Bank Sarasin, the Main Sponsor.
To promote a dialogue between art and the public and to celebrate the first solo show in Singapore by the artist of Israeli descent, the Embassy of Israel in Singapore has organised Zadok Ben-David: Photography Contest with the support of Sotheby’s and Singapore Tourism Board. Lovers of art, nature and photography are invited to submit photographs with captions of Zadok Ben-David’s sculptures. Two winners will be selected by a panel of judges including the artist, and prizes include sumptuous meals for two at the Singapore Botanic Gardens restaurant, Au Jardin by Les Amis and miniature Zadok Ben-David sculptures. The contest runs from now through 15 February 2013.

About the Artist and the Work
Born in the Yemen, educated in Israel (at the Bezalel Academy of Art and Design) and in London (at St Martin’s School of Art), Londonbased Zadok Ben-David’s work reflects his twin fascinations with evolution and magic. Man’s relationship with animals and nature are recurring themes in his sculptures, which, playing with illusion and scale, constantly surprise.
Having represented Israel at the Venice Biennale in 1988, Ben-David has since exhibited widely in Asia, America, Europe and Australasia. His 2003 commission for the Yad Vashem museum in Jerusalem, For is the Tree of the Field Man, (a tree composed of tiny human figures) was a key milestone in his career.
In 2007, Ben-David was the subject of a solo exhibition at Guangdong Art Museum in China and in 2008 he was commissioned to create a landmark sculpture for the Beijing Olympics. Ben-David’s celebrated Blackfield installation, featuring a forest of 20,000 tiny botanical sculptures, has been on a world touring exhibition since its creation in 2008 and has elicited a rapturous response in every location. Last year, he created his first architectural work, Magic Box, a “levitating” gallery for the School of Architecture and Design (Escola Superior Gallaecia) in Vila Nova de Cerveira, Portugal.