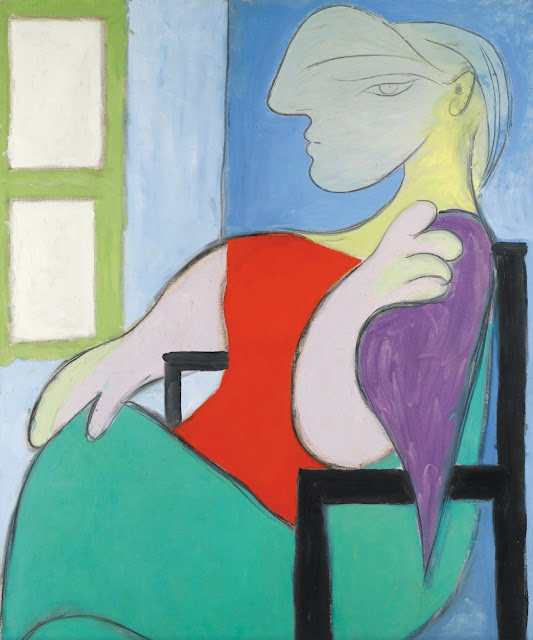 Sotheby’s sale on 5th February 2013 also features Claude Monet’s Nymphéas avec  reflets de hautes herbes from the artist’s celebrated late waterlilies series and Miró’sexemplary post war masterpiece Femme revant de l’evasion
London, January 2013 Sotheby’s London forthcoming Impressionist & Modern Art Evening  Sale on Tuesday 5th February 2013 will be led by a  monumental 1932 portrait of Picasso’s “golden  muse” Marie – Thérèse Walter (est. £25 – 35  million / HK$312.5 – 437.5 million*). Featuring an exceptional group of works from eminent  collections, the sale will also offer  Claude Monet’s  memorable Nymphéas avec reflets de hautes herbes of 1914-17 (est. £12 –18 million/HK$ 150 – 225 million) from the artist’s most  celebrated series of works, and an outstanding example of Miró’s important post – war paintings, Femme revant de l’evasion (est. £8 – 12 million HK$ 100 – 150 million) that comes to auction for the first time in 50 years from the Wallach Collection.
Helena Newman, Chairman of Sotheby’s Impressionist & Modern Art Department Europe, said: “We are delighted to present a sale this February that includes such important and hugely appealing works that span right across the Impressionist & Modern Art field, spearheaded by Picasso’s 1932 work Femme assise près d’une fenêtre. In recent years in particular we have witnessed the remarkable allure of Picasso’s portraits of Marie – Thérèse to collectors, with La Lectureselling for £25 million – double its pre-sale estimate – in Sotheby’s February 2011 sale, and Nature morte aux tulipes selling in Sotheby’s November 2012 sale for US $41.5 million. This particular portrait is a striking and  notably modern – looking work from one of the artist’s most celebrated periods.”
Picasso’s stunning and monumental depiction of Marie – Thérèse Walter,  Femme assise près d’une fenêtre  of 1932 (illustrated on previous page) is one of the artist’s most iconic images and part of the defining series which introduced his “golden muse” to the public eye.
The story of Picasso’s first encounter with Marie – Thérèse – in 1927  when she was  seventeen years old  – and their subsequent love affair, is among the most compelling in 20thcentury art history.  Picasso’s young lover Marie – Thérèse became a primary emblem of love, sex and desire in 20th century art. At first her presence in Picasso’s works was veiled or coded as the artist was at the time married to Olga Kholklova, but when  portraits of Marie – Thérèse hung – for the first time  – alongside Cubist and Surrealist works in the major Picasso retrospective of 1932 at Galerie Georges Petit in Paris and at the Kunsthaus in Zurich, Picasso’s secret came out. Upon seeing Picasso’s numerous references to a specific face that was clearly not her own, Olga Khokhlova was suddenly alerted to the presence of a new woman in her husband’s life.
Claude Monet’s monumental Nymphéas  avec reflets de hautes herbes (est. £12 – 18 million/ HK$150 – 225 million), which dates from 1914 – 17, is a powerful testament to the artist’s enduring vision and creativity in his mature years. Possibly one of the most iconic images of the Impressionist movement, the significance of the theme of waterlilies in the development of modern art is now fully recognised. This work was a stepping stone to the celebrated Les Grandes  Décorations, now in the Musée de l’Orangerie in Paris, which are according to renowned dealer and scholar Daniel Wildenstein, “the crowning glory of Monet’s career, in which all his work seemed to culminate.”