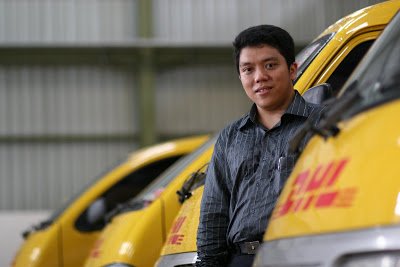 - Advertisement -
AT a relatively young age of 32 years, this gentleman has assumed the position of deputy CEO of PT Mitrapiranti Usaha-Caraka City Courier (Caraka), a local courier company that his father, Rudy Pesik, set up in 1985.

Rocky J. Pesik acknowledged that his involvement in Caraka was in line with his parents’ wishes. Rocky said that although his parents did not force their will upon him, he knew they hoped he would continue the family business. “They want me to succeed in running this company,” Rocky said when met at his office in Siemens Business Park Building on Jl. MT Haryono, Jakarta, last month.

As the succeeding generation, Rocky bears the responsibility of promoting the company and cannot just sit back and take it easy. Just like other business players, his first step was to increase the company’s turnover and introduce efficiency measures. He set to developing the services and being more aggressive in sales, and slowly business improved. “Experience and direction from my parents made it easier to promote Caraka. My dad has encouraged me to be engaged in selling activities since I was in elementary school. I well remember the things I sold, such as fried bananas, which I sold close to school. In my teens, I joined the scouts and learned something about entrepreneurship. Then my friends and I sold cookies door to door,” said the father of two, reminiscing.

After managing Caraka for four years, in 2005 he was assigned to manage PT Birotika Semesta, a representative of DHL Indonesia, to replace his mother, Louis Pesik, who was previously the director and later became the company’s commissioner.

Rocky Pesik, who likes photography, said, “PT Birotika Semesta was set up by my father in 1982. Before establishing PT Birotika Semesta and Caraka, my father ran an information technology consultancy firm. I think this was in 1978. In 1982, the management of DHL called my dad and asked him to cooperate in setting up the Indonesian branch of DHL. My dad was immediately interested in the offer.”

Rocky said before the official establishment of DHL, the clients of DHL were mostly state-owned enterprises and government agencies. Every year the dispatches increased in volume, thereby making it increasingly burdensome for DHL to cope with the orders. To facilitate dispatches, DHL Indonesia was set up.

Rocky, who was born in Jakarta on Aug. 14, 1976, acknowledges that the courier business is promising. Today there are some 800 companies in the Express Couriers Association of Indonesia (Asperindo). There are 123 member companies operating in Jakarta, Bogor, Tangerang and Bekasi, which explains why the competition has become fiercer and fiercer. There are also other couriers who do not belong to Asperindo. As a result there is a war of rates, with some couriers charging as low as Rp 1,500 per document. “I don’t want to set my rates below those of Pos Indonesia. I want to compete to improve quality,” Rocky said. For two-day delivery, Caraka charges Rp 5,000 per document. For same day service, the rate is Rp 10,000 per document. Although Rocky was reluctant to mention the turnover of the company, he said these rates enabled the company to turn a profit.

To be able to survive amid the fierce competition, Rocky has devised various business strategies. One of these has been to build a brand. It is undeniable that the international brand of DHL has made it easier for him to interact with his customers. Virtually all companies are familiar with the name DHL.

Besides having the advantage of DHL’s good reputation, Rocky has built infrastructure to support dispatches in the regions such as by establishing gateways in Batam, Surabaya, Bali and other regions so that the consignments dispatched can be immediately delivered to the region of destination without having to be sent to Jakarta first. The company’s IT-equipped services have also been increased. “We always measure the level of customer satisfaction in our services and their complaints. Customer value is absolutely necessary for consumers. In marketing philosophy, customers are kings. As kings who have sacrificed money, they deserve to enjoy a benefit equal to the sacrifice made for the product or service paid for,” he said.

The demand for customer value for each industry varies. Therefore, the strategy of a vendor or a producer in providing a benefit to customers also varies, depending on the category of the industry.

In the courier industry, Rocky said, they always try to give a number of benefits to customers. First, they give more so that they can “reduce” their customers’ spending. Second, they do not sell “courier services” but offer a solution. Third, they set a standard of service and continuously improve it. Fourth, they provide safety, comfort and trust to customers.

Many people believe that a successful business begins from providing a solution. Rocky said this was true in the case of DHL. This company is there to provide a solution for customers. Customers who find it difficult to send documents or small and large packages will be helped by DHL. The company even provides a one-stop logistic provider service to facilitate their customers in business.

As a commitment to customers, DHL is ready to provide special packaging or special treatment for certain commodities. Other services include “one hand, one invoice”, the absence of irregular costs, tax invoices and other services.

Besides being committed to giving a lot of benefits to customers, DHL also always maintains quality by investing in infrastructure, technology and its employees. In the field of infrastructure, the company continues to renew its technology to keep up with the times, such as by establishing a service center and a gateway and using mobile technology. As for employees, they are managed to be one team with one goal.

DHL is also ready to educate and develop its employees. They are given training both at home and abroad. Some employees are sent to the head office of DHL in the U.S. The performance of every work process is also measured. When an employee makes an achievement, he will be given further encouragement. “The salaries and allowances we give our employees are still the highest in the industry. We will certainly help any employee who is in trouble. For me, employees are not just workers but company assets. Besides being responsible to myself, I am also responsible to God. This is my business philosophy,” he said.

Rocky added that a client’s trust was an asset to the company. DHL builds a feeling of safety, comfort and trust on the part of its clients, starting from the selling process.

Despite well thought out preparations, today’s global economic crisis is having an impact on the courier business. The forwarding business reflects the export and import activities of a country. If a country is experiencing an economic slump, automatically its exports and imports will be disrupted. “The 1998 economic crisis affected only developing countries like Indonesia, Thailand, Malaysia and the Philippines. Today, the crisis we are going through is global in nature and all countries, including advanced countries, are suffering the impact. The impact of this crisis has particularly hits the United States. If the United States experiences a crisis, it will have an impact on other countries. At present, consumption in the United States has dropped, and automatically exports from Indonesia have likewise dropped. As a result dispatches have also dropped,” Rocky added in a serious tone. (Faisal Chaniago)